Python is without a doubt the Next Big Thing to look into. There’s no need to be anxious about its worth, future possibilities, or job opportunities. Python has made a huge contribution to the advancement of your profession, even though its popularity among developers and other areas is diminishing.

How popular is Python?

It’s no surprise that the tech scene is growing worldwide. To stay relevant, businesses are adding more and more digital services to their offerings.

As a result, there is a huge increase in the demand for python developers. This has significant consequences for businesses wanting to hire fresh developers on a budget.

It means that the job market for IT professionals is growing more difficult and competitive. Developers will be able to demand higher salaries in the future. Such wage concerns should be taken into account if you’re intending to make key employment decisions shortly, especially when comparing in-house hiring against outsourcing. When selecting whether to recruit a developer in-house or outsource, salary is typically the decisive factor, and a miscalculation here can be costly.

Why is Python preferred among other programming languages?

What distinguishes Python from other programming languages? How did it come to be that programmers of all ages, both experienced and inexperienced, wanted to use it? How did huge corporations adopt Python and use it to create their flagship products?

What are the job options in Python?

Python’s progress is producing encouraging results in the near future. There are a number of online python certification courses that can help you get the skills you need quickly. You don’t need to be concerned about the possibilities Python provides; all you have to do now is pull up your socks and go to work!

What are the highest paying cities in India for Python Developers?

What are the highest paying cities in the US for Python Developers?

What are the highest paying cities in the UK for Python Developers?

How can beginners learn Python?

It doesn’t matter if you’re a newbie or a seasoned pro, if you have some decent python skills, you’ll get a job sooner or later, because Python is here to stay in the industry. In the case of freshers, however, following the strategies outlined in this article would undoubtedly assist them in obtaining a job as a python professional more quickly and easily.

Python developers are in high demand both in India and abroad, as industries recognise the benefits of utilising Python. Although anyone may learn to code using Python, having a background in science or computer science is advantageous. There are various online and offline options for learning Python and earning a certificate.

DataMites™ is the global institute for data science accredited by the International Association of Business Analytics Certification (IABAC). We offer a diverse range of courses in python that is applicable to freshers and experienced professionals alike. You can choose your preferred mode of training, like online python training, blended learning or classroom python training.

While learning Python on your own is a viable alternative, completing a course or gaining a certificate will make your skills appear more credible. You can earn a certificate in a more specific module or area if you have a specific career path or job description in mind. It will strengthen your CV and help you make a better first impression on a potential employer!

Check out these articles –

Why Learn Python for Machine Learning? 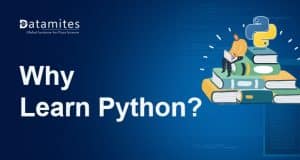 Do You Prefer Python or Java?